A downloadable game for Windows and macOS

In No Hacker's Sky you're a space enthusiast, who also happens to be a skilled hacker. It's set in the future, where a huge space mining corporation called Extrasolar Mining Corp (EMC) has deployed probes, satellites and manned stations on distant planets and moons. You are contacted by a group called Unknown to hack into the EMC network to find out what is going on.

Here's where the game begins. You use the in-game command prompt together with the "node map" to hack into EMC's network. You start by poking for weaknesses, exploring the network for emails and passwords, eventually gaining access to offworld drones. Look for evidence in documents and emails, and while using their drones you can look for signs of what they have been hiding.

To access nodes you either have to provide certain password files, or clear 3D visualized puzzle worlds (19 of them). You'll even get to explore a couple of planets near the end of the game (screenshot 4 is one of them).

"In No Hacker's Sky you play a skilled computer hacker who is attempting to uncover an interplanetary conspiracy using a mixture of basic command line prompts and first person puzzle solving.

With it's intriguing storyline, clever use of interfaces and unique hacking-based puzzle design, No Hacker's Sky is a joy to play. A well crafted hacking sim, full of discovery, unique gameplay and innovation." - Calum Fraser (FGP)

To open nodes, you must first open the node map by writing in the command "toggle nodemap". What you see then is the main node map, with different network nodes. These network nodes hold a sub node map, where the nodes are essentially individual systems.

Tools cannot be used if the node hasn't been hacked/unlocked.

Hint: You can click on email notifications to open the new email.

Hint 2: If you seem to be stuck - remember to use the Hound tool frequently. It will show hidden places and also reveal traps. Rogue can only be used on known tripwires.

Hint 3: There are only three viruses but many more honeypots. Use them wisely.

Hint 4: 'help' to get commands and see how many proxies (lives) you have left.

Hint 5: If you're stuck after the first four nodes, please remember to read the emails. Use Hound on the node "Hub" and the hidden node will be shown. When you reach the end node in that network, click the "Back" button on the node map to go back to the main node map.

Hint 6: Please read emails carefully, sometimes you get important info from them (especially in the first node network).

Hint 7: To use tools on nodes, you need to have access to them.

Hint 8: Keep in mind you can drag the windows around, as well as resize them (just like you would in Windows, OS X or Linux).

This game was made in about 20 days for an online game jam called "Mix Tape" held by the /r/IndieDev subreddit, with the theme of "Exploration". It was held in collaboration with the No Man's Sky subreddit, hence the name "No Hacker's Sky".

Really was enjoying this game up until I glitched towards the very end. In the larger maze map I was flung above the map and was unable to get back inside causing a softlock...

I'll likely try to get to the end again eventually but being cheated like that has left me sore. Overall though I enjoy the game and wish more hacking themed games would be made.

Enjoying this game, however Hound will not show me anything about the node I scan. I don't know if I should be looking for the info somewhere, but I can't see it in any obvious places. I've already lost 3 proxies to honeypots even though I scan every single node and it never tells me anything.

Edit: Lost the game because it expects me to know things that it never tells me. Everything you need to know about each node to not die is only given to you once you've already lost proxies to it.

It shows up in the properties tab in the file browser, it also shows right above before you click to start the hack.

please put known issues further towards the top. just quit the game cause i thought i bricked it when pressing home would've fixed my issue

Nice concept, but the annoying platforming really takes you out of the game, as does the primitive terminal, which prompts you to type "help ____" for tips, but some of these commands are not in the game.

Also I can't seem to figure out honeypots. I must be misunderstanding something here.

i believe they only take lives if you take stuff

that was fun, finished the game with almost 100%, curse you honeypot

wait how did you finish it

lol didn’t think so, just wished that you could get rid of honeypots without using viruses, and should be able to get more proxies

I want to download this but don't have anything to extract the files from the rar. Alternate more user-friendly ZIP version?

maaaaaan it should be .tar.gz, now that'd be thematic

Fun game but emails can't be sent from unknown addresses. The protocol doesn't allow it. Kinda nitpicky since its the future or wtv but felt wierd.

none of the tabs for the email browser nor the nodes in the node map worked for me. i tried looking for solutions but i can't. i've lost the will to continue trying, but nonetheless, i love the idea, wish i could play.

I'm experiencing an issue. i am stuck on the left of the first of the nodes on CEO, somehow i was catapulted above the maze and while attempting to get back down i fell off the map. is there a way to respawn or exit the level without restarting the entire game?

I'm intrigued by this game, but for some reason all of the buttons on the boxes such as the email list are not where they should be, I have to move my mouse way off to the left to actually hit the exit button. Any idea on how to fix this?

for some reason the game wouldnt let me quit and I tried turning my laptop off but now it’s stuck?

it was an interesting experience, but I got bored after the honeypot and tripwire stuff, it may just be me, but I think that there was too much regarding the command console(also is there a way to save?)

do you need hacking experiance ?

I've been stuck for way too long on that one level at the start where you must choose the paths. Unless there are some sort of solutions somewhere, i'm not gonna try and keep going again, too much frustration killed my will to keep trying that path level.

Until i find some walktrough or you tell me how to do that, i'm just gonna stop here.

hey are you still working on the map for this game?

I got through a lot but haven't found any drones

every time i type help, it says command not found

is there a saving program, i lose my progress everytime

Hey this is an awesome game, but I don't know what to once I've hacked the three nodes in the home node. Also, the place where I have to put my mouse to 'click' on anything is always more on the left of the object than it should be. Other than that, I love the game :)

The start of the game took a minute, clicking around the nodes to find the initial email, which "emailbrowser" is a lot of useless extra to type by the way, and it wasn't very intuitive how to use the tools. You have to drag them to the other side of the window, but it's not really clear how to detect tripwires and honeypots. There's no pattern to really help the player establish what looks "too sweet" when starting out your goal is to download everything. It could be a good game, but it lacks in player empathy to be playable.

What do I do, i can click in the node map. The game's just a buch of commands towaste your time.

On the CEO maze, I just started exploring when suddenly I was rocketed in the air and when I fell back on the ground I was on the walls : problem couldn't go back in it because space was too short for me to slip in so I went outside hoping I would die and come back. But I didn't. (You shoud add a manual keyboard ; and not typing at some special place ; to exit or retry hacking. Especially in a game where there's no checkpoints and additional lives) Anyway on the rest your game is really cool and isn't a mini-game lasting 2 minutes ;)

"Welcome to No Hackers Sky. Type help to see a list of commands."

"Unknown Command. Type help for a list of commands"

"Unknown Command. Type help for a list of commands"

dont put the comma there, you only use spaces I thin

I kinda wish I didn't have to start over when I lost my proxy's. Some kind of checkpoint would be good

I'm really a good hacker now, thanks for making me a hacker lol :D

Thanks for this free game

great game, but I faced some bugs like decelerated after drop from air(include jumping,it is fine through jump again to gain acceleration) and goes through a black hole in the CEO Maze Node. 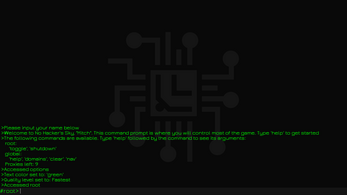 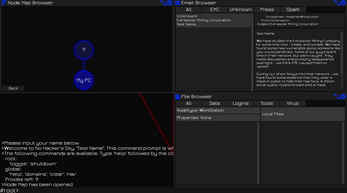 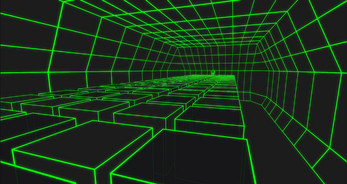 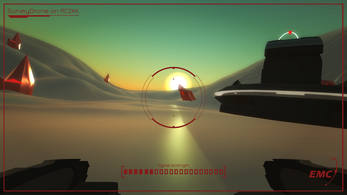